Home > Business > When birthdays happen in isolation – a birthday wish followed by discharge!

When birthdays happen in isolation – a birthday wish followed by discharge!

Mediclinic Constantiaberg has recently bid a fond farewell to a patient in their isolation unit. Mr Haywood, 74, was a patient for a short while after having travelled to visit his daughter and her family in the UK, contracting the coronavirus during his short trip.

On his return to South Africa, symptoms such as dizziness presented, but due to a previous illness, these were not uncommon for him. On his way to consult his General Practitioner, he had a motor vehicle accident and as a result he was admitted to Mediclinic Constantiaberg, where his COVID-19 status was confirmed. He was accommodated in the isolation unit, and all the precautions were taken to ensure his recovery.

His admission meant Mr Haywood was a long way from family. His daughter Simone, based in the UK, contacted the hospital anxious that her father would receive the care he needed. She was quickly reassured, and received regular updates from Renaldo Adams, the Patient Experience Manager. Simone believes that just having solid facts – which ward her father was in, the name of the doctor looking after him and an email contact for that doctor was invaluable.

She explains, “I think it’s important to have someone to reach out to on a daily basis when you are so far away. That makes the whole situation less anxiety-inducing! Being able to chat to Dr Rogers via email was reassuring and then having a patient liaison for other less pressing matters as well as keeping my father occupied was a blessing.”

Dr Sean Rogers, a physician at Mediclinic Constantiaberg, explains Mr Haywood’s condition, “Our patient came in after having a fainting episode resulting in a car accident. His medical history included a number of co-morbidities. His initial progress was slow but he improved to the point where he was able to care for himself again. The decision to discharge Mr Haywood was based on his ability to further self-isolate and recover in the comfort of his own home.

During his admission, Simone’s response to her updates included a note that it was soon to be her father’s birthday – and she was feeling the distance. Team Constantiaberg rose to the challenge with the catering department being notified of a special event coming up and the nurses in the isolation unit teaming up to celebrate with Mr Haywood. Mr Haywood had tried to ask the nurses to buy a cake – but instead this was baked for them by the hospital catering team. 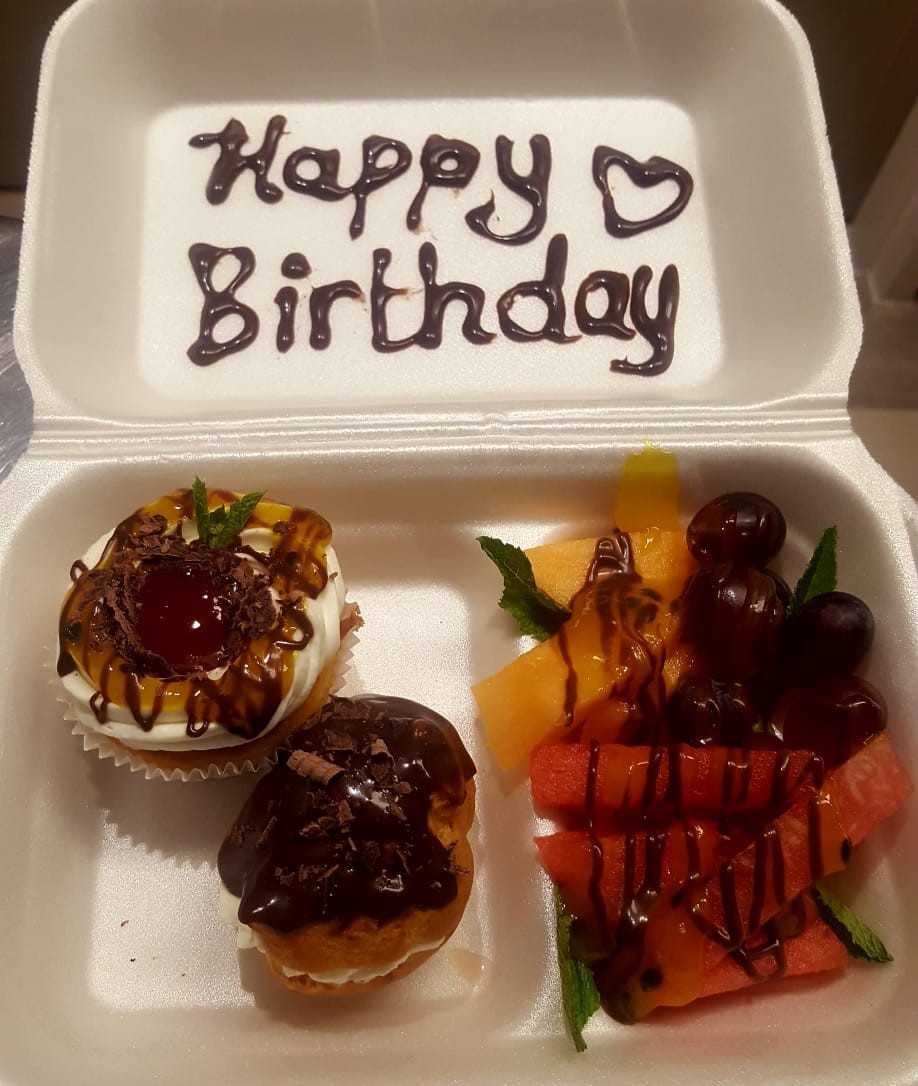 Dr Rogers explains his view on COVID-19. “The group of physicians at Mediclinic Constantiaberg have been in a position where we have been meeting regularly for quite some time. As a team, the feeling is that if the curve can be flattened, it will result in less burdening of the healthcare system. Allowing us to manage patients according to their individual condition and signs, which we believe will provide better results.”

He continues, “It is a positive time, and the leadership team have been incredible. I am truly grateful for how supportive the Hospital General Manager, Henk Laskey, has been and how he has gone about his work. This allows us to stay focused. I am in contact with numerous other pulmonologists and we keep sharing ideas.”

Mr Haywood himself has only praise for his doctor and the attending nurses, “They were so helpful. Wonderful. At times, it is hard to recognise the nurses, as they were in full protective gear, but you get to know the names. They were wonderful. Especially since I was cut off from my family.”

Mr Haywood was discharged just over a week after admission, and will continue to make his recovery at home, where he is in daily contact with his doctor for monitoring purposes. It will always be a special memory for Mr Haywood, as he thanks the team at Mediclinic Constantiaberg for the efforts in making his birthday memorable, even if it had to be done in small numbers! Mediclinic would also like to thank his family for trusting the team with a celebration in their absence.

COVID-19 surges put us all at risk

Dr Natalie Buttress, an audiologist at Mediclinic Durbanville, believes that rapidly advancing technology is addressing many of the challenges experienced in early hearing devices.