Home > Patients > Home and happy, after being born at just 450g

Home and happy, after being born at just 450g

Zeldri Visagie was delivered at just 23 weeks, at Mediclinic Cape Gate, in May 2019. Today she’s not only surviving but thriving, thanks to expert, specialist neonatal care.

“I ask anyone to show me a baby, who has been born at 23 weeks, who looks so good. She weighed under half a kilogram, but now? Look at her.” Dr Gertjie Rossouw, a neonatologist at Mediclinic Cape Gate, is still amazed at the recovery and development of one of his littlest patients, almost a year later.

Typically, babies who are delivered before 25 weeks of gestation face a reduced chance of survival. And of those who do survive their first year, about half will develop some form of significant neurodevelopmental disability.

“We’ve seen severely preterm babies born before, of course,” Dr Rossouw explains. “But in the majority of cases, if these babies survive, they live with major disabilities that seriously affect their development. Very, very few of these children will lead what we’d call a normal life.”

Zeldri Visagie is an outlier.

At a routine scan early in 2020, her mom, Elizna, was diagnosed with an incompetent cervix. Also known as a cervical insufficiency, this condition can contribute to either premature birth or the loss of an otherwise healthy pregnancy.

Her gynaecologist suggested she rest in bed until her next appointment. Three weeks later, when she visited Mediclinic Cape Gate again, feeling a little nauseous, her doctors had a more dramatic prescription: to deliver her baby immediately.

Zeldri was born on 2 May 2019, at 23 weeks, weighing just 450 grams. Dr Rossouw and his team helped stabilise the baby in the neonatal intensive care unit, before approaching her mom to explain the risks associated with preterm birth. “We discussed her chances of a good or bad outcome, and we decided together: let’s give this child a chance.”

She was given what is often referred to as a trial of life, where she is supported in the neonatal intensive care unit (NICU) and closely monitored for adverse reactions.

There was a lot at stake. “For babies born this early, and this little, we are not looking at small issues,” Dr Rossouw explains, “it’s big things – blindness, intracranial bleeding, cerebral palsy. They grow up into loving families, with moms who treasure them. But they face major, physical health problems that we can’t cure.”

Cerebral palsy is not one condition but a group, together affecting a child’s ability to control his or her muscles. While the symptoms of CP vary from person to person, most people with the condition are unable to stand, balance or walk properly, and will need lifelong care. The condition is usually accompanied by intellectual disability, seizures, scoliosis, and issues with speaking or hearing. 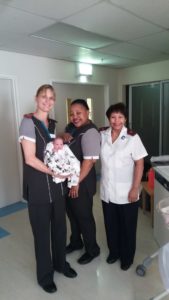 Zeldri spent 108 days in NICU. During that time, her weight fluctuated as doctors and nurses fought to ensure she took in enough nutrients without risking infections. “It was a team effort. The resources we have are world class, the nurses are very experienced, and we have teams of specialists on standby whenever we need extra support.”

Elizna is as happy as any new mom could be. As the family is from Lutzville, near Vredendal, the trip to Brackenfell was never a quick or easy one, but it has been rewarding. “The past year has been interesting,” she says. “Everyone we know, family and friends, prayed for Zeldri. If I had to do all of this over again, from the beginning to now, I’d choose Dr Siebritz and I’d choose Dr Rossouw, to go through this with me, all over again. There is nowhere I would rather go, if I had to, than Mediclinic Cape Gate.” 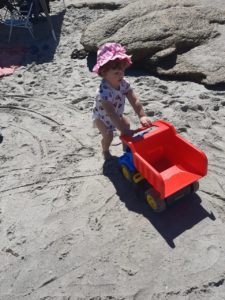 At almost two, Zeldri is running around the house, full of beans, saying her first words. “She was always healthy,” Dr Rossouw says. “Small and premature, but healthy. And it shows. There are very few children in the world who have been born that early, who will meet all their milestones. She’s a fighter. She’s got something special.”

By Dr Deon Tredoux, physician: Mediclinic Hermanus As everyone involved in clinical medicine would have encountered, the attitude and will to recover play a major part in a critically sick

Back in the saddle thanks to expert care